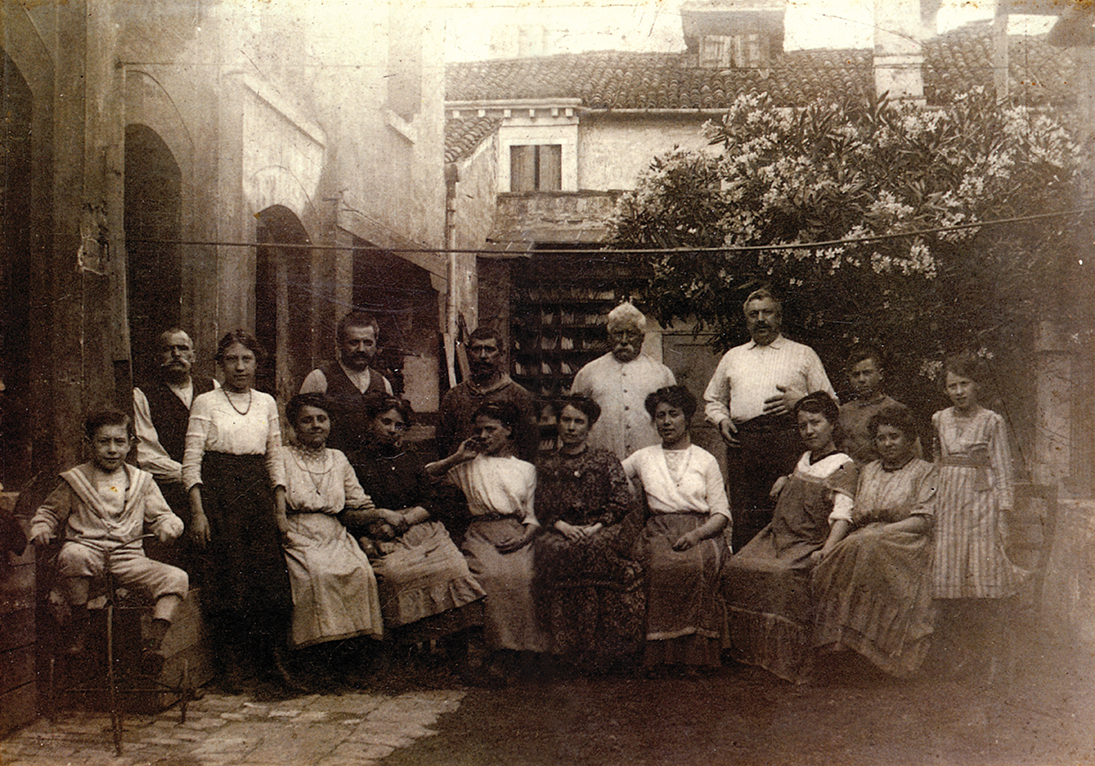 When Angelo Orsoni set out for Paris in 1889, little could he have guessed at the success his courageous, original idea was to bring him. One thing is certain, though: this man of forty or thereabouts with his strong, resolute air, was taking a crucial gamble. For Orsoni aimed to show the world – and above all himself – that, within the vast enclosures of the Great Exhibition in Paris, alongside the most avant-garde techniques that looked steadily towards the approaching the future, a place of honour could be assigned to an ancient and noble medium: the mosaic. His success, when it came, was enormous. His multicoloured panel, which had been created as a sample collection of smalti and gold mosaic tiles, represented Orsoni’s first goal in a life dedicated to mosaic.

Angelo Orsoni was born in Murano in the mid-nineteenth century and, like many of his contemporaries, spent his early years working in glass factories. But before long, that job became Orsoni’s great passion, and he became especially skilled in making crystal, coloured glass and aventurine.

He was discovered by the celebrated mosaicist Giandomenico Facchina who, in 1877, opened a furnace making mosaic tesserae in Venice, and offered Orsoni a job producing smalti. Facchina moved to France, but young Angelo was reluctant to follow him, held back not only by his love of Venice but by his firm conviction that he could become a success in his own right in his native city. Facchina presented his valued assistant with the Venetian workshop and immediately became his best client: it was 1888.

The following year, the Great Exhibition was held in Paris. This was the age of Art Nouveau, when mosaic ceased to be regarded simply as a medium for religious works of art, and was used for the first time in secular art and decoration. Mosaic production enjoyed a healthy revival. At the start of the new century, Angelo Orsoni transferred his business from its primitive headquarters at the Misericordia to the Fondamenta di Cannaregio, where it is still situated. While he carried on experimenting with colour, Orsoni managed to display his genius in the field of technical innovation, introducing coal heating and inventing a rotating cylindrical press to compress the incandescent glass paste, in this way living the tesserae a more even surface.

Orsoni’s name soon became linked to major projects such as those involving the Ecole des Beaux Arts, the Trocadéro, the Hotel de la Ville, the celebrated Opera House, the Sacré Coeur Cathedral in Paris, the Sanctuary at Lourdes and St. Paul’s Cathedral in London, to name but a few. When Angelo Orsoni died in 1921, his son Giovanni inherited a company that was by now established throughout Europe.

Giovanni Orsoni did not betray this cultural, as well as technical, legacy. He was responsible for the wonderful mosaic decorations on the spires of Gaudì’s masterpiece, the Sagrada Familia Church in Barcelona, and for those inside the Altare della Patria in Rome. Giovanni was assisted by his son Angelo, who took over the company on his father’s death in 1935. The years of World War II created a brief pause in the Orsoni’s activities, which were renewed with vigour and enthusiasm after the fighting ended, when Angelo was joined by his son Ruggero.

When his father died in 1969, Ruggero carried on the family business as tirelessly as ever, together with his brother Lucio, who added a new craft to the traditional production of smalti by opening a workshop manufacturing finished mosaics. Orsoni mosaics can now be admired in the furthest corners of the earth – from St. Christopher’s in Belgium to Ataturk’s Mausoleum in Ankara, Westminster Abbey in London, the gilded domes and Buddhas in Bangkok, King’s Palaces in Saudi Arabia, the Forum of Les Halles and Bassin de La Défence in Paris and the Pagoda of the Grand Palace of the Royal Family in Thailand.

In 2003 Trend Group, established in 2000 by Pino Bisazza, acquired the Angelo Orsoni foundry, enriching in this way the international company – already worldwide known for the production and the distribution of the industrial mosaics – with the historical handcraft Venetian company. Lucio Orsoni is still nowadays artistic consultant and Honorary President of the company. With the application of every single tesserae the Orsoni’s history continues, as brilliant, as pure and as magical as the mosaics themselves.